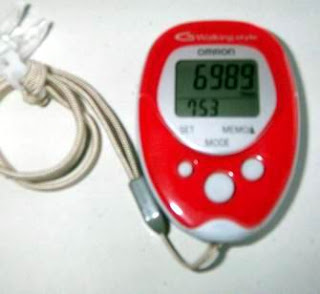 Tony’s gifts to me are never a surprise. I pick them out myself and he simply pays for them. I know that inwardly he winces when he sees the price tag. But that’s a small price to pay (pun intended) for him having to search the stores himself. He abhors shopping.

Last Christmas season, however, I was too busy chairing the committee for our clan reunion. Before I knew it Christmas eve was upon us. For the very first time, Tony’s gift surprised—floored may be a better word—me.

He gave me something I wouldn't dream spending a cent on: a pedometer. It's a small gadget you tie around your neck and it measures your steps. I’ve been walking without one for seven years and it can’t make me walk any more than I already do.

I think he gave me a pedometer because he knows how obsessed I am with walking; or, among all the stores in a mall, the sports shop is the least crowded. Ooops, I should be thanking him instead of speculating on why he bought it.

I have always been tentative about my answer when someone asks, “How many kilometers do you walk in the morning?” My guess: seven kilometers, considering I walk one whole hour at a very brisk pace.

My new pedometer confirmed that: 6989 steps.

At 1,000 steps per kilometer, I do walk approximately seven in one hour! I wear the thingy the rest of the day to confirm having made 10,000 steps at day’s end (what some doctors recommend to help maintain good health). Now I know how much walking I do during the day—a lot.

This same pedometer was what my sons had in mind when they were shopping for my gift. They did a turnabout when it was beyond their budget (which mothers have to share with pretty young things). One of them bought me instead a blouse on sale and the other, a book which has not arrived. Amazon has made the holiday mail traffic a perfect excuse.

I have tried to suggest—not very subtly—to these boys that a nice letter telling me what a good mother I am would make the best gift, without them worrying over budgets. Obviously they’d rather spend precious cash than wrongly butter up their mother’s ego.

"I hope I don’t lose my pedometer the way I lose my cell phones and umbrellas," I said to nobody in particular.

“How can anyone lose anything tied around her neck?” JC asked.

Children ought to work harder at getting to know their mothers. I've lost flash drives, ball pens, pendant watches, IDs, necklaces, you name it. They were all neatly tied around my neck.