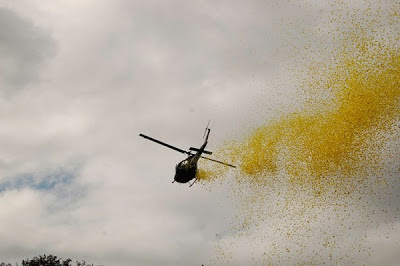 The nation was on tenterhooks 27 years ago when then President Ferdinand Marcos refused to leave his seat despite millions of people gathered at EDSA and elsewhere in the first-ever people power the world has ever seen. Yellow was the color that symbolized our unity.

Then on TV, on the edge of our seats, we saw the man and his family board a helicopter leaving at last.  It was like New Year's Day, but the rejoicing was accompanied with cathartic tears and euphoria.

Around 8:30 this morning we witnessed the sky turn yellow. Confetti rained down as the nation celebrates the 27th anniversary of this day of freedom from the dark ages of dictatorship.

Many have vivid memories of the days when we trekked to EDSA to make our voices heard. For as long as I have my memories intact, I will never forget those days.

Today we again remember those hours when we braved tanks, guns, and tear gasses. Our children were still babies then, but in their yellow t-shirts, they too were active participants in our joint search for democracy.

Lord, guide us on how not to squander the grace that you rained on us that day. Amen.