By its sheer splendor, a rainbow always renders me speechless; it makes me remember God’s covenant with Noah after the great flood:

“When I send clouds over the earth, the rainbow will appear in the clouds, and I will remember my covenant with you and with all living creatures. Never again will the floodwaters destroy all life.” Genesis 9:14-15 (NLT)

I am not alone; those who know their Bibles remember that God remembers, too. No matter how much floodwaters we experience in this country typhoon after typhoon, I know that it isn’t going to end life on earth. Something else will—what that is, nobody knows.

If one rainbow stretched across the sky brings me goosebumps, I wonder what a quadruple rainbow might do!

Recently, Amanda Curtis, CEO of a fashion company in New York, was blessed to have snapped a photo of not one, not two, not three, but four rainbows! 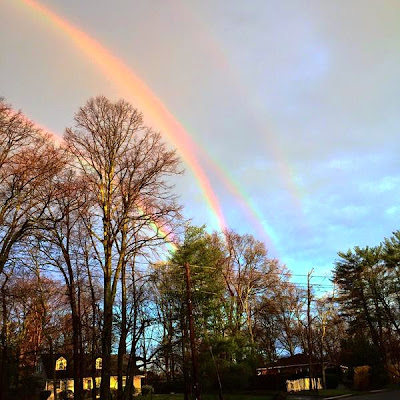 After she posted this photo to Twitter, it became a phenomenon, immediately re-twitted thousands of times. All major TV networks and newspapers scrambled their way to Amanda, asking permission to publish/air the photo.

But we are a cynical people, too. After seeing the photo, many branded it to be fake. Some sneered saying, “There is no such thing!” According to the CNN weather producer, this was a double rainbow that has been reflected in the sky, due to a smooth body of water underneath the rainbow.

Rainbow specialists have a scientific explanation, “Quaternary rainbows are natural products of the combination of refraction, dispersion and reflection inside raindrops. These are the same processes that create all rainbows, yet they are taken to their extreme to produce these higher order variants.”

For me, when I behold a rainbow appearing in the clouds, I am reminded that there would be no more floods like the one God sent in Noah’s time.