The Greatest Play Ever Written (6)

That would make a perfect title for a bestselling book thriller adapted into a movie or a Broadway play. Ehud’s story, which comes right out of Judges 3, is action-packed, garnished with gore and greed.

It happened during the reign of Eglon, king of Moab, who oppressed and coerced the people of Israel into worshipping idols. The Israelites cried out to the Lord for deliverance.

God raised up Ehud, a left-handed judge, who made a double-edged sword a cubit long (about a foot and a half) to kill the king and liberate His people from his rule.

Ehud must have been a charmer, possessing a golden tongue. He sweet-talked the king into believing that he had a “secret message” for him from God. The king ordered his servants to leave.

Ehud’s “secret message” was his sword, which he plunged into the fat belly of the unsuspecting obese king. The Bible graphically describes this murder scene in verse 22 (NASB), “The handle also went in after the blade, and the fat closed over the blade, for he did not draw the sword out of his belly; and the refuse came out.” 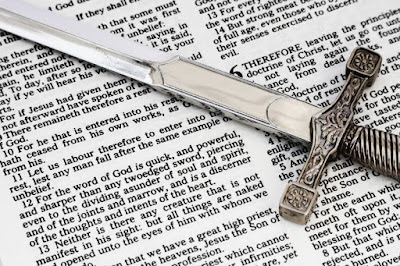 (Modern-day authors of horror and violence can draw inspiration from this verse.)

Like a seasoned assassin and master of deceit, Ehud deftly locked the doors to keep the guards out, and fled just as deftly.

When Ehud returned to the people of Israel, he blew a trumpet of victory and told them that the Lord had given Moab into their hands. They wasted no time in striking down about 10 thousand Moabites, all able-bodied and strong—not one was spared.

And the land had peace for 80 years.

As an audience of this powerful play, I have learned that our God hears the cries of His people and rescues us in times of need.

Through Ehud, God’s grace freed the people of Israel from abuse at the hands of the Moabites.

God doesn't discriminate in choosing people to accomplish His will. Ehud was left-handed, considered a disability in the ancient world, yet God used him to win a major victory for His people.

(Note: This is the sixth in a series of eight posts on The Greatest Play Ever Written.)