A funny thing happened on our road trip across California.

I was clicking away, enjoying the fascinating terrain changes through the car window and  humming silently, “This is my Father’s world . . .”

Tony was snoozing beside son #2, who was quietly driving and listening to some medical program on radio. Suddenly, son and I smelled an odor that reeked so, so, so badly, we were alarmed. I quickly woke Tony up.

“Papa,” son asked, like the doctor that he is, “is your tummy okay?” (Or some words to that effect.)

“What the—whoa!” Tony flinched, blinked his eyes open, and breathed out a loud snort from deep sleep. Unfairly and prematurely judged, he barked, “Sorry to disappoint you, folks, but it isn’t an inside job. Look out the window!”

And we saw the cattle ranch that seemed to stretch from one end of the world to the other. Black cows littered the hills and valleys like tiny dashes, dots, and other punctuation marks. 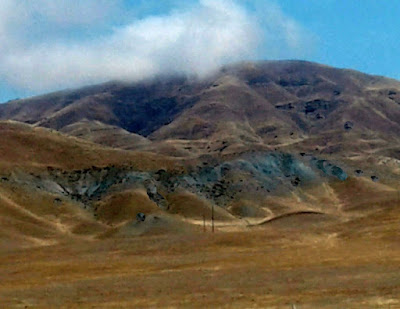 “Oh,” son and I were properly chastised.

I quickly took a shot of the vista as evidence of my poor husband’s innocence and non-offense.

The scene was picture perfect, but the smell was nasal torture—for a good twenty minutes, or more.

I can’t remember ever laughing this hard, this loud, and this long with son #2 and his dad. After which, the comedy of errors became the greatest topic of conversation for many miles thereafter. I never had this long a conversation with the both of them either.

One of my recent blog posts was about black flowers. And now I am writing about black cows—and the black humor sparked by them.

Black is beautiful; black is grace.