We were on the road on Monday; rather, we were traveling on 3/4 of the road to and from Umingan, the small town where I grew up. It is harvest time and, as far back as I can remember, 1/4 of the highway is used by the farmers in the province of Pangasinan to dry their rice grains. 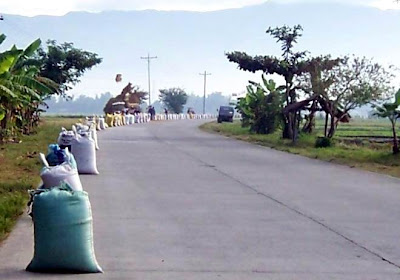 It was a very important long trip—we went to say our final good-byes to my cousin, Manang Letty, 77.

It’s been a month of so much sadness and so many good-byes. But we rest in the comfort of our Father’s grace, slowly easing us out of our grief and making us move on, one day at a time.

Manang Letty loomed large in my growing up years. 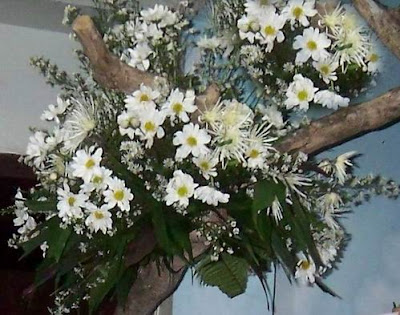 She was a respected teacher in the grade school fronting our house, a community leader, a most-sought-after ghost writer and emcee for many school and town activities, and eventually—after her retirement—a lay pastor in the local church.

Always very funny, she played what seemed to be a big joke on me when I was eleven. She made me the godmother (probably the youngest to ever be given such formidable role) of her older child, Melvin. Well, it wasn’t a joke; it was a privilege and a responsibility, which to this day I take very seriously.

Always very creative, she’d don the most outlandish costumes and perform the most unusual numbers during talent nights in our family reunions.

Manang Letty knew her music well, too—some cousins would describe her voice as that of an angel in her younger years. I’d describe her as a perpetual choir conductress extraordinaire, making even atonal people like me sing on key.

Many people at the wake said she knew her time was up. In the conferences that she attended, she was assigning people what to do at her funeral. To her nieces, she mentioned not being here for Christmas. And to her children, she’d joke, “Your papa is calling me to be with him.”

But no one believed she’d go away so soon. She was on the go, not bedridden. But, then, nobody knows God’s timetable.

It was another hurried good-bye, so soon after we did one for my nephew Direck. But good-byes no matter how short or long-winded are, well, good-byes.

Good-bye, Manang Letty—for now. Again, nobody knows when our next reunion would be. All I know is, it will be in God’s own perfect will and time.