(I have blogged about how Baguio has changed for me. And now, here is another post on changes. Bear with me. When you reach a certain age, you tend to long for the days of old.)

Going home isn't the same. Nothing is the same in the little town where I grew up.

I had successfully conditioned my mind to the absence of my mother at home. But coming face to face with a structure that had fallen into decay—now, that crushes the heart to smithereens. It's a 48-year-old house, with my mom's stamp all over it, which sometime in the future has to go, especially because nobody regularly lives there anymore, but not now.

The flood in November, which almost wiped out Umingan from the face of the earth, hastened the house's decline. That catastrophe of epic proportions was thrown in the hands of my sister, who tried to salvage what was left of the public library which she was trying to put up.

Only two familiar items remained on the wall: the six-foot Vergara family tree (mom's side) which greets every guest at the front door, 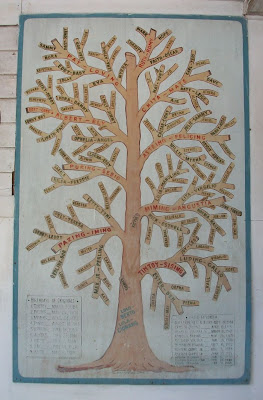 and my very first painting (stamping on wood) which I bequeathed to Aie. 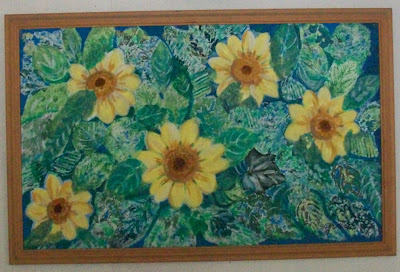 The house's decay is irreversible and unless something major is done, the structure will soon tumble down like a deck of cards.

Going out of the decrepit house, I walk a few meters to Burubor, the river where we used to swim as children. If our bar soap, then, happened to slip through our fingers, there was no problem diving for it. One could spot exactly where it was. This is how Burubor looks today.

I lament the changes in my hometown, the once-serene and refreshing Umingan where Mateo, the eight-year-old hero in my "Oh, Mateo!" book series, lives happily with friends and family.

But I realize that Mateo's and my Umingan could stay that way forever only in my books. Because everything on this planet changes; nothing remains constant, except God's grace.

The great flood I think happened during Ondoy's, not November.

The flood that hit Pangasinan was Pepeng. It was actually in October but the devastation continued till November because the flood wouldn't subside fast enough.

Totally agree with you Grace. We lament how things fail and fall with time, even our eyesight, hair and eyesight, haha, but thank God, He never fails- always the strong anchor we can depend on.

I discovered more floaters this morning. I wonder what other signs of aging I will discover tomorrow. But God is good.