In Love with David


In my youth I was in love with David, the young, handsome shepherd who slew Goliath, the much-feared giant warrior. Michelangelo’s sculpture was how I saw his face. 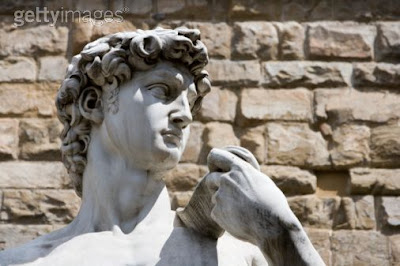 A most unlikely candidate, David was chosen by God Himself to be the king of Israel to succeed King Saul who had disappointed Him.

David is so fascinating that again on April 14 this year, when he was first mentioned in my chronological/devotional Bible, I couldn't stop reading. Three days later, I was already on May 18, over one month ahead of schedule .

Devotional Bibles are meant to be read and reflected on daily (one to two chapters at a time) but when you're reading the events as they happened in chronology, you get sucked into the action. You may know the story by heart, but you want to dwell on details you might have missed before.

A daring dynamo and a creative whiz, David was gifted with so many talents: he played all the musical instruments of his time, composed music, wrote poetry, and if he were born in this era, he would be a prolific blogger.  He recorded all his emotions in hundreds of Psalms. And yet, he was a daring warrior, a methodical organizer, and a charismatic leader at the same time.

As an artist, he was impulsive.  As a warrior, he was calculating. As a manager, he was systematic. He was what we call today a right and left brainer—a rare combination.

Although he was God's anointed, David suffered greatly as a TNT from the pursuit of jealous Saul who wanted him killed.  As a fugitive, he went through monumental difficulties—crying out to God every step of the way—but never wanting of the Lord's grace of protection.

Finally, as King and father, David was both a success and a failure. He made epic mistakes with God and his people.  Many of his undisciplined children had minds of their own and rebelled against him.

But David never forgot who God was; he was always immediately contrite after sinning against the Lord.

Hollywood would never be able to capture the carnage, pillage, immorality, and bloodbath that happened in David's lifetime.  Not even a Cecil B. De Mille or Steven Spielberg could put into images the colossal crimes that would make serial killers, perverts, and Osama Bin Laden today seem like cartoon characters.

David reigned over Israel for forty years, seven of them in Hebron and thirty-three in Jerusalem.

What makes David a riveting read for me?

He paints a picture of torment in his life, yet maintains a deeper joy found in his inner self.  We earthly beings look for happiness that’s external. David teaches us to hie towards a place of glorious well-being, where we can develop pure trust in a sovereign God despite the turmoil in a turbulent world.

How can one not fall in love with David?

Psalm 32: 5-7 (NLT):  “Finally, I confessed all my sins to You and stopped trying to hide my guilt. I said to myself, 'I will confess my rebellion to the Lord.' And You forgave me! All my guilt is gone. Therefore, let all the godly pray to You while there is still time, that they may not drown in the floodwaters of judgment. For You are my hiding place; You protect me from trouble. You surround me with songs of victory.”

Wow! First time I heard a woman smitten with a biblical character. David is the first person to prove that nothing is insurmountable with an unshakeable faith

The Bible is such an interesting read. It features young leaders like David and old ones like Moses. There was no rhyme nor reason (not in our limited human understanding) for God in picking people to do his work! Have a good day, JP!

I started reading the chronological bible a month ago after Tess finished reading it earlier this year. Mayat...saan ko nga masardengan....Siak kenni ni Tess are arriving next Saturday. CU soon.

Hey, that's great! We'll see you then. Call us when you get here.

The same thing happened to me when I read the Chronological Bible that first time. I couldn't put it down!