During the yuletide season, not too many words are devoted to Joseph as much as there are to Mary.  Even in movies showing the nativity, Joseph seems to be relegated to the background.

When we talk of our faith, Joseph might not be one of our Biblical examples.  Now, as we celebrate Christmas and find the manger in our midst, let us zoom in on Joseph. 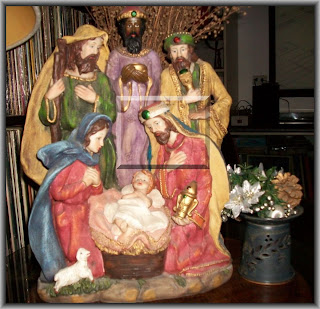 The custom in those early days was for parents to arrange the marriages of their children. They negotiated while their children quietly waited for their elders' decisions behind the scene.

Mary confided to Joseph about an angel who announced that she would have a child who (Luke 1:32) “. . . will be great and will be called the Son of the Most High. And the Lord God will give to Him the throne of His father David . . .”

In Matthew, we read that Joseph was a "righteous man," but he found Mary's story too hot to handle. You see, if anyone found out that Mary was pregnant, she would be stoned to death. Joseph mulled over a quiet divorce after marriage.

But God intervened. As Joseph was sleeping, an angel from God spoke to him, (Matthew 1:20) “Joseph, son of David, do not fear to take Mary as your wife, for that which is conceived in her is from the Holy Spirit.”

Joseph listened and listened well. He was faithful to God's call.

Dear God, help me to emulate Joseph's faithfulness.  May I remain faithful to You this season and all year through.

(The above is one of the December daily thoughts in my new book, "Grace Found Me," which came off the press this week. You might want to look it up. In another week, it will be available in major bookstores nationwide.)

It must have been a real struggle being Joseph. Yet he obeyed. Thanks for the message Grace. That's really the heart of Christmas, saying "yes" to Jesus. A lot of us are still struggling with that today because the approval of others pulls us away from His grace.

The heart of Christmas -- I wish that people see it beneath and beyond the Christmas bling-blings.