Out of a roomful of almost 80 pre-school kids, enthusiastically singing a praise action song, a little boy about five years old caught my eye.  In the middle row, he looked in my direction and waved, as though he had known me for years.  Then, just as instantly, he went back to singing with gusto.

I was introduced as the author of the children's books that they read in school.  And that I was going to talk about those books.

“How old are you?” I asked as an opener.  They said four, five, and six—all at the same time.  But the boy  in the middle row stood up and said with the widest grin and loudest voice, “I am five!”

I told them about how I write books for them; and when I asked for a volunteer who might want to read a page of my “Super Devos,” all 80 hands were raised. But the teacher chose a girl to do the job. I got all the responses I wanted.

It was a very spirited group, all dressed up for a Christmas class party after the session with me.

The rewards of a children's book writer come in activities such as this.  The kids make you feel like you're some kind of a magician and Santa Claus at the same time, bringing them tricks they enjoy and goodies they wished for.  They shriek and giggle and speak in a loud volume.  And you wonder what on earth have you done to deserve such accolade.

The session was over and they lined up to leave the audio-visual room.  As they passed my way, they smiled their biggest and offered their hand for a little touch.  But the little boy in middle row surprised me by giving me a loud smack on the cheek, then rushing back to his place in the fast-moving queue.

The principal invited me to visit the kids' classrooms for some photo op.  There I immediately spotted the little boy again because he waved that same knowing wave.  I requested to have a photo taken with him and asked what his name was. 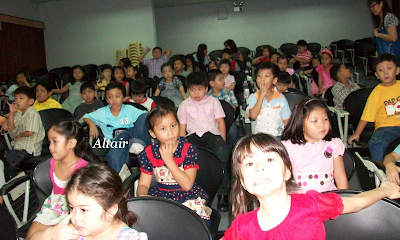 On our way out of the school, I told the principal, “That boy Altair is so adorable.”

A reader at age five! No wonder he seemed to know me so well.  He reads my books!

From the letters of readers I receive and reply to,  I have always suspected that there is an invisible connection and palpable affection between author and reader.  This I have proven in my recent trip to Cebu with a little boy named Altair.